Kangana Ranaut’s official Twitter handle @KanganaTeam has been suspended by the micro-blogging site, after the actress posted a series of tweets perceived to be controversial.

Kangana had shared a video, where she commented on the reported violence that took place in West Bengal after the assembly election results were declared.

The actress had captioned the video: “Distressed beyond words, death of democracy, important message for our government #BengalBurning #BengalViolence”. The actress shared the same video on her Instagram profile too which is still in her feed section:

Meanwhile the actress has reacted for the first time post her twitter suspension, in a written statement to ABP News, the actress said: “Twitter has only proved my point they are Americans and by birth a white person feels entitled to enslave a brown person, they want to tell you what to think, speak or do.”

She added: “Fortunately, I have many platforms I can use to raise my voice including my own art in the form of cinema but my heart goes out to the people of this nation who have been tortured, enslaved and censored for thousands of years and still there is no end to the suffering.” 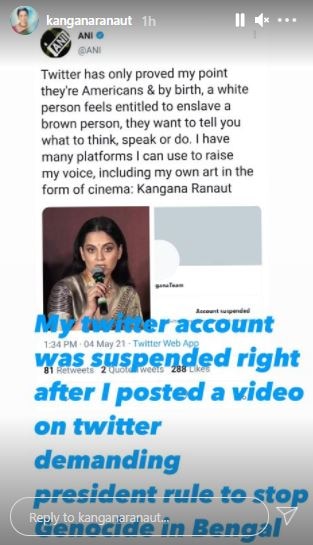 What You Must Know about Filmora Free Key Before Applying?